It was such a lovely morning.  My son gave me a beautiful sweater, and he liked the few gifts I got him as well.  He really enjoyed his stuffed stocking, and it makes me so happy to see his happiness.  That’s the best aspect of parenting.  I don’t care how old your child/ren is/are: wanting for, and taking pleasure in, their happiness, and success, is paramount.

We had a scrambled eggs and bacon breakfast, and then we made our Gingerbread house.  We don’t have a good track record at that activity.  We’ve only made two of them before, both of which came out awful.  We didn’t name the first one, but we dubbed the second one: “Sucky, the Gingerbread House”, and this one my son named: “Mediocre, the Gingerbread House”.  We did have a lot of fun making it, and maybe any future attempts will give better results. 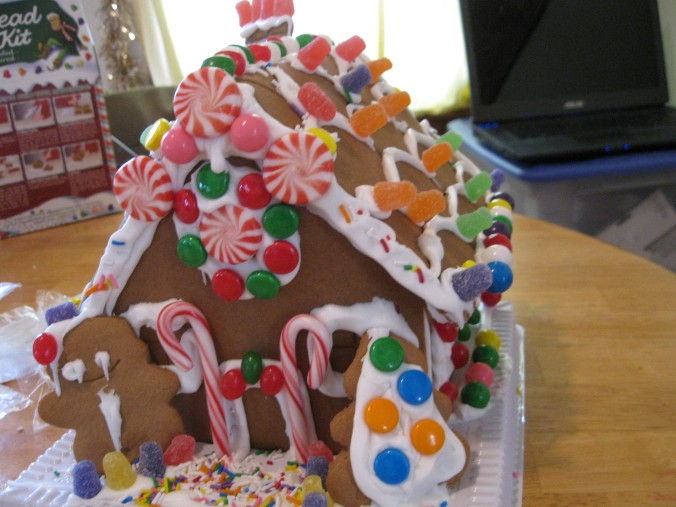 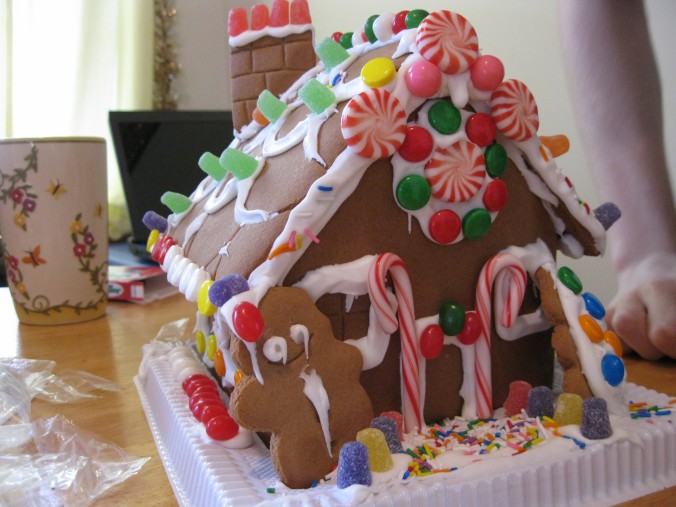 My son’s feeling mostly himself again, although he still has a cough, and he told me he woke up drenched in sweat in the middle of the night so he left his room and slept on the couch, where I found him this morning.

He left a little while ago to hang out with friends, and while I want him to stay well, it was really nice to have him home and wanting my help and company for the last few days. 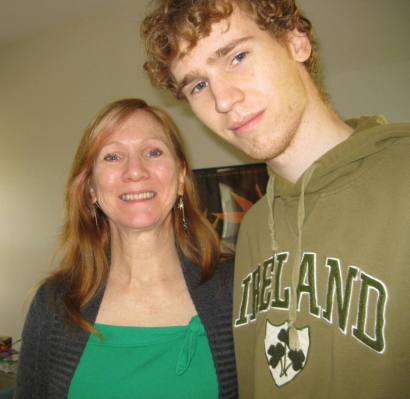 Merry Christmas every one!

Rabbit, Rabbit.  The ancient Celtic year begins today, marking the start of winter.  Winter was already ushered in rather harshly with our recent Nor’easter dumping thirty inches of snow in some areas.  I feel lucky that my town escaped with just over a foot of the heavy, wet snow.  I was only out of power for part of a day, while some of my friends are yet to get back their electricity.

Yesterday, I visited my Mom because her phone was out and I wanted to make sure she made it through the storm alright, even though I know that one of my aunts was staying with her, and the guy who works for her and lives nearby would also have checked on her and I figured I’d have gotten a call if anything bad had happened.  Then I thought that all phone service in the area might be out, and I just wanted to visit regardless of anything else.  I was a bit worried that fallen trees or downed wires would prevent me from making it to my mother’s house, and it might well have earlier in the day because I saw evidence of cleared trees and other debris all the way there.

It was almost evening when I arrived, and I brought a flashlight in case it was dark by the time I left.  My mom doesn’t have electricity or running water, so the storm changed nothing for her except interrupted phone service.

The glow of the kerosene lamps, and warmth from the wood stove, enveloped and welcomed me even as I was welcomed by my mother and aunt.  They were happy for my unexpected company and we chatted about the snowstorm’s effects, and how weird it was to have a major storm before Hallowe’en, as we sipped coffee and evening began settling in.  I don’t know if it was the time of day and the way the lamplight glowed and cast slight shadows on the walls, or the steamed windows and cooking smells from whatever dinner my mother was making, or simply spending time with my mother and one of her sisters, but there was something so extraordinary about being there that I noticed and enjoyed in the moment, and that feeling, or experience, actually, has stayed with me since.

I left before it was dark and made my way up the path without needing my flashlight.  I noticed the stillness of the woods around me as I walked, and had a sense of being present to life in a way that I rarely sense.

I got up this morning and began working on things that I often think about doing rather than starting – or finishing.  I feel my life changing, almost radically (for the better), and I hope that’s true.

On Hallowe’en, when I was around five or six (maybe even the same year I split my head open), my older siblings were allowed to leave on their own to go trick-or-treating, but I had to stay home until I finished my supper, and wait for my mom to get my little brother in his costume.

I remember thinking how completely unfair it was that I had to wait for my baby brother, and be treated ‘like a baby’, when my next oldest sister was only two years older than me, and she got to go out with my other sister and brothers.  After enough complaints, my mother warned me that she could leave me home while she brought my brother around if I kept harassing her.  I don’t think I uttered a word after that until we finally went out into the chilly night.

We had split-pea soup that night, which was one of my favorite dishes my mom made, but there would be no seconds that night.  I wanted to get out there and trick-or-treat until my pillowcase was filled to the brim with candy!  I never stopped to think how heavy it would be to actually fill a pillowcase full of candy.  Back then, there were no ‘fun-sized’ candy bars, only full-sized bars, but people often gave things like small boxes of raisins, or popcorn balls, or apples.  My mom would usually throw out anything that wasn’t store-bought, so I had to beg her let me keep a candied-apple one year, and she finally acquiesced after I badgered her so much that she told me it would serve me right if I found a razor-blade in the apple.  I also think I lied and told her I knew who it was who gave me the apple, so she could have them arrested if I died.

All week before Hallowe’en I walked home from school singing the Five Little Pumpkins song, and felt a chill up my spine when I sang, “Oo, ooh went the wind, and out went the light…!”  I would pull off any leaves still clinging to their branches that I could reach on my way home, as though that would hasten the arrival of the much-anticipated day.

My older sisters and brothers always ended up with more candy than I, or my younger brother ever got, and I remember thinking that I couldn’t wait until I was old enough to get as much candy as them.